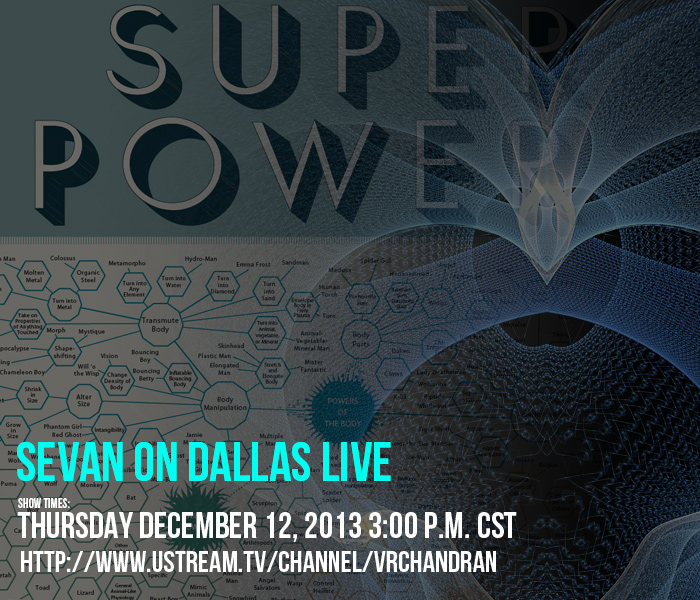 Join me Sevan on Dallas Live for a 1 1/2 Show on Super Consciousness. The show will be hosted by Dr. V Ravi Chandran who's bio you will find below.

Dr V Ravi Chandran is a pharmaceutical scientist, graduated with a PhD at University of Florida (1986), and was involved in business for more than 30 years. Sold his pharma companies in early 2000 and continued to concentrate on medical research. He owns a number of patents, granted by US and numerous other countries. He is a commercial and instrument rated airplane and helicopter pilot and conducts scenic airplane and helicopter tours in Dallas as a retirement hobby. He owns an Internet radio station, and invites everyone to listen to music, talk and comedy. This is simultaneously conducted with the video broadcast. He routinely hosts famous authors, celebrities and speakers of all walks of life in his Radio Talk Show Dallas Live daily at 3:00 pm central time which is heard all over the world. Both audio and video broadcasts are relayed again 8:00 PM central time on the same day, and again over the next few weeks randomly scheduled.

Comment by Ryan Elliott on December 15, 2013 at 9:30am
I listened in and I must say science (which is limited at its highest rank!) has no legs with out spiritual awareness first. all is self and no knowledge of self is always going to be a limited perception based of speculative guess work. Thank you again Sevan and the resistance family wholeness and balance to all.

Comment by Rain on December 14, 2013 at 11:16am
I always learn something new from listening to Sevan interviews... it amazes me to see how a persons veiw point is basis on the program education system alone, and its really diffcult to see pass that, no offensive to the host But just because one has a title in front of their name (Dr, Phd, etc ) ..does not mean that even they could learn something about higher conscious,keep teaching us Sevan, we all need guidance...

All is self maxim, offers greater Awareness to innerstanding. Balance, to superconciousness.

Thanks  Sevan and the entire resistance astral quest family... and the dr. for hosting the broad cast.. on  his dallas live station.

"Took down the video it was way too far over his head" Love it!!! Keep bringing knowledge and quickening Sevan, got my support on this end.

I thoroughly enjoyed the broadcast.  Wholeness to you Sevan!

Sevan was concise and dropped a few pearls. Host of show was honest enough to admit most of it went right over  his head. Good job Sevan!!!!

looking forward and into this one, wholeness.