THE PATH OF UNUSED SEXUAL CURRENT 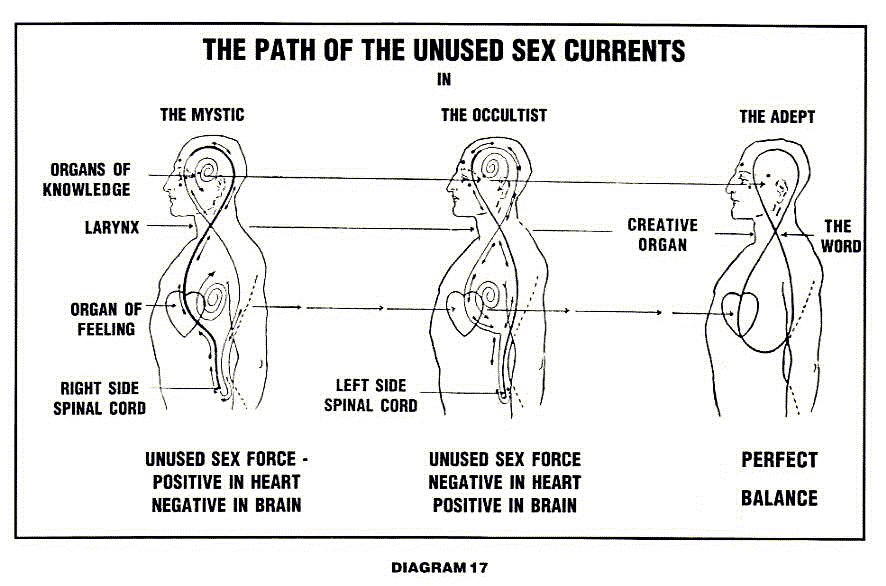 In the majority of people, the greater part of the sex force which may legitimately be used through the creative organs is expended for sense-gratification; therefore in such people there is very little of the ascending current shown in diagram 17.

When the aspirant to the higher life begins to curb these excesses more and more, and to devote his attention to spiritual thoughts and efforts, the trained clairvoyant can perceive the unused sex force commencing to ascend. It surges upward in stronger and stronger volume, along the path indicated by the arrows in diagram 17, traversing the heart and the larynx, or the spinal cord and the larynx or both, and then passing directly between the pituitary body and the pineal gland toward the dark point at the root of the nose where the highest state of spirit, has its seat.

These currents do not usually take one of the two paths indicated in the diagram to the entire exclusion of the other, but generally one path is traveled by the greater volume of the sex-currents, according to the temperament of the aspirant. In one who is seeking enlightenment along purely intellectual lines, the current travels particularly over the spinal cord, and only a small part goes over the path through the heart. In the mystic who feels rather than knows, the currents find their way upwards through the heart.

Both are developing abnormally, and each must sometime take up the development he has neglected, so as to become fully rounded. Therefore the aim is to give the body a teaching that will satisfy both classes, although their main efforts are at times expended in reaching the intellectually minded, for their need is the greater on this plane.

This current must be cultivated to some extent before the real esoteric training can begin. It will thus be seen that a moral life devoted to spiritual thought must be lived by the aspirant for a certain length of time before it is possible to commence the work that will give him first-hand knowledge of the super-physical realms and enable him to become, in the truest sense, a helper of humanity.

When the aspirant has lived such a life for a time sufficient to establish the current of spiritual force, and is found worthy and qualified to receive esoteric instruction, he is taught certain exercises, to set the pituitary body in vibration. This is often done through mental and spiritual suggestion and needs no physical teacher. This vibration causes the pituitary body to impinge upon and slightly deflect the nearest line of force (See diagram 17). This, in turn, impinges upon the line next to it, and so the process continues until the force of the vibration has been spent. It is similar to the way in which the striking of one note on a piano will produce a number of overtones, by setting up a vibration in the other strings which are at proper intervals of pitch.

When by the increased vibration of the pituitary body, the lines of force have been deflected sufficiently to reach the pineal gland, the object has been accomplished, the gap between these two organs has been bridged. This is the bridge between the World of Sense and the World of Desire. From the time it is built, man and woman become clairvoyant and able to direct their "gaze" at will. Solid objects are seen both inside and out. To this person space and solidity, hindrances to true observation, have ceased to exist.

I understand how to communicate with music. It seems that when I am centered the flow seems endless. I have knowledge from many sources and expierences. So, when my music is flowing and I am playing the piano or creating a new symphonic, would that be an example of the sexual energy flowing in balance? It takes all of my body (Mind, heart, vibration, ears, fingers, innersight, outersight, spirit,)

As a female I attempt to innerstand this from a masculine point of view. Throughout my life I have been exposed to such cultural lies including many of the male opinions on female 'lack of sexuality' as a means of justification. I continue to see this every day. 'Men are visual, females aren't' as a way to justify porn addiction. Etc Etc Etc. And since this is culturally accepted, women are made to feel 'inferior' in so many ways.  But I observed and took many mental notes. I wondered--why so much energy placed on degredation of the feminine? If it is true that we are weaker and less than--why expend so much energy programming the people that this is true? Wouldn't it just pan out on it's own?!  I found that most women are VERY receptive sexually, but because their OTHER chakras come pre-opened for the most part, or easily opened, it is difficult for us to hurt others in activity such as using another sexually or war-like activity. There is an innate 'golden rule' karmic understanding with most females who haven't already been tampered with and therefor compromised in many ways.  So we are VERY much visual creatures. We VERY much have a heightened sexual drive. But when the root chakra is balanced with the others.....Poof disappears the ability to hurt others, to screw them over, to use them sexually, etc. IN general. This is by no means a comparison. It just means that circulating sexual energy throughout the body is not foreign to most females. What is foreign is many males seeming path to make women feel that they are less than in so many ways. So even though many of us have figured this out--in many parts of the world, it's still a 'man's world' in many, many ways.

If you were working with the chakra centers outside the physical body, 8-12th centers, would you just start at the hear and continue the loop up to the 12th? or start a whole other loop for that region?

Question - How shall I overcome my passions?

Ramana Maharshi - Find their root and then it will be easy. (Later) What are the passions? Kama (lust), krodha (anger), etc. Why do they arise? Because of likes and dislikes towards the objects seen. How do the objects project themselves in your view? Because of your avidya, i.e., ignorance. Ignorance of what? Of the Self. Thus, if you find the Self and abide therein there will be no trouble owing to the passions.

(Later) Again, what is the cause of the passions? Desire to be happy or enjoy pleasure. Why does the desire for happiness arise? Because your nature is happiness itself and it is natural that you come into your own. This happiness is not found anywhere besides the Self.

Do not look for it elsewhere. But seek the Self and abide therein. Still again, that happiness which is natural is simply re-discovered, so it cannot be lost. Whereas the happiness arising from other objects are external and thus liable to be lost. Therefore it cannot be permanent and so it is not worth seeking. Moreover craving for pleasures should not be encouraged.

One cannot put out burning fire by pouring petrol over it. An attempt to satisfy your craving for the time being, so that the passion may later be suppressed, is simply foolish.There are, no doubt, other methods for the suppression of passion. They are (1) regulated food, (2) fasting, (3) yoga practice, (4) medicines. But their effects are transitory. The passions reappear with greater force as soon as the check is removed. The only way to overcome them is to eradicate them. That is done by finding their source as stated above.