It's bad enough calling it the "decade of vaccines". The "Gates of Hell" Foundation is now announcing an Orwellian plan to electronically register every child to supposedly keep track of their vaccines.

"Vaccines will be the key. If you could register every birth on a cell phone -- get fingerprints, get a location -- then you could [set up] systems to make sure the immunizations happen."

Gates suggested using cell phones to record each birth and send the information, including biometric identifiers, to a central database. This database would then send reminders to parents' phones when it was time to come in for vaccines or other treatments. He said a prime location to implement such programs would be northern Nigeria or northern India, where vaccination rates are less than 50 percent.

Now the Illuminati "shout out"...

Acknowledging that registering every single birth has never been done before, Gates said he’d like to see a birth registration system, and because it’s a new technology, “we should let 1,000 new ideas blossom”  in order to make it happen. (source)

Where have I heard that before? Seems so. It's no mere "coincidence" that Gate's "1000 blossoming ideas" is similar language to Bush's esoteric "1000 points of light" illumination reference.
And who talks like that? "Let 1000 ideas blossom". Sounds like some Chinese ruler of some ancient dynasty..
Is Bill announcing he's the new point man? Or just that he's one of the gang now and feeling good about it. It appears to me Gates is pledging his loyalty and signaling to the Illuminati that "I'm fully on board and the program's in full swing!" IBM's Solutions for a Smarter Planet" campaign is more of the same kind of posturing as the Gates gambit. Dress the Machiavellian world changes in techno-improvement intelli-garb and people will just look on with awe, as they do with Gates. His move to "philanthropist" was the icing on the cake to get the unwary public on board.
"Coincidentally", IBM designed the management system for the personnel records of the concentration camps in Nazi Germany.
Speaking of Nazis....

Bush Sr. and his true "points of light"....the cold "Illuminated" plan to take over and rule the world.

We first heard this evocation of Illuminist imagery from Magog George H.W. Bush in his inaugural address:

I have spoken of a thousand points of light, of all the community organizations that are spread like stars throughout the Nation, doing good. We will work hand in hand, encouraging, sometimes leading, sometimes being led, rewarding. We will work on this in the White House, in the Cabinet agencies. I will go to the people and the programs that are the brighter points of light, and I will ask every member of my government to become involved. The old ideas are new again because they are not old, they are timeless: duty, sacrifice, commitment, and a patriotism that finds its expression in taking part and pitching in.

Whatta crock. Again, who talks like that? And then in his State of the Union address:

We have within our reach the promise of a renewed America. We can find meaning and reward by serving some higher purpose than ourselves, a shining purpose, the illumination of a Thousand Points of Light.

Drippy, I know. But occult references have power amongst the initiated and he's speaking to his own. George Bush was using symbolic language and was referring to the body of Illuminati initiates. When Bill Clinton in his State of the Union Address was speaking about the "setting sun and then the dawning of the new era" he was also using symbolic language.
This Points of Light smokescreen was a big deal in its day and still goes on. This program branched out into the Points of Light Foundation to curry sycophant volunteerism and later merged with the Hands On Network to become the Points of Light Institute, of all things, back in 2007.
All to perpetrate the esoteric in your face "points of light" concept. And the scam continues.

All on the same team. Points of light my foot.

Peggy Noonan supposedly penned those words, but who knows where this really originated as it's clearly coded speech. One literary usage was in C.S. Lewis' 1955 book "The Magician's Nephew". C.S. Lewis wrote "One moment there had been nothing but darkness; next moment a thousand, thousand points of light leaped out..." C.S. Lewis was known to be steeped in the occult and well on board with the thrust of the Illuminist agenda.

Some say it traces back to our Masonic "founding fathers".

Significance of the "thousand points of light" and the New Dawn

The sun/points of light imagery is everywhere. As the Illuminati believe they are the true enlightened ones, they utilize it everywhere..flags, logos, emblems, architecture..to mark their presence, their beliefs, and their plan for world domination. But working it into verbal imagery has predominantly taken these two forms, the points of light and the rising sun or dawn of a new day. (see here for more on the New Dawn.)

And when they use these terms they are announcing something.

As many scholars know, the Illuminati readily utilize coded language to convey plans to each other and try to brainwash the masses to accept their goals. Now, what does the thousand points of light mean? As early as September 1788, Freemasons George Washington and Alexander Hamilton used the words "points of light."

The occultist Alice Bailey popularized this concept. Bailey refers to the lights as man's inner being from the sun god and men who are in the occult leadership called the "New Group of World Services" are apart of the Brotherhood (Illuminati). Bailey wrote about this in her 1957 book, "The Externalization of the Hierarchy."

Alice Bailey in this 1957 book described the points of light as the leaders of the occult group called the New Group of World Servers. Bailey believed that the points of light and light groups were necessary in building up the New Age. Bailey believed that an invocation ritual was needed in order for Light to exist among men. This Light isn’t the true Light of God, but a New Age false Light.

Bush's words were used to establish his allegiance to the Elite and condition citizens of this magical alchemy.

As were Bill Gates' words. I believe he is openly announcing his allegiance to the Illuminati as he rolls out the intention to openly build a central data base including every man, woman and child, beginning with the newborn, under the guise of "healthcare", and linking them to the central nervous system of the new world order.

And like his predecessor, he's cloaking the Illuminist agenda  behind the smokescreen of "good works" for the "underprivileged" of this world, going after the defenseless children first. 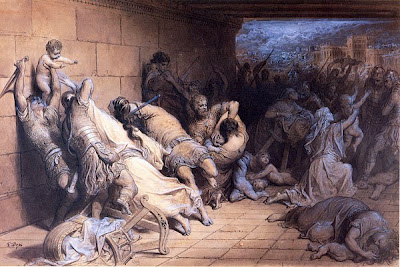 "The Slaughter of the Innocents"

This is not the first time in history that a data base was created preceding an eventual "cleansing" or slaughter. As mentioned earlier, IBM helped the Nazi concentration camps keep track of the gender and ethnicity of each of their detainees. (see here)

But this reminds me of an even earlier version of a worldwide registration and ensuing extermination.

It is told that during a worldwide census decreed by Caesar Augustus, individuals had to return to their ancestral cities. It was at this time that Jesus' parents, Joseph and Mary, travelled from their home in Nazareth, Galilee, to Bethlehem, where Jesus is born.

King Herod, being told my the Magi that a rival "true" king had been born, fearing an uprising, ordered what has been called the "Slaughter of the Innocents", killing every young male child in Bethlehem.

Beware. Children have always been their primary target. But they're after all of us.

So-called philanthropic worldwide healthcare is a Trojan horse of the worst order.

What A Deep Read! Thanx For Sharing An Excellently Put Together Post......

Gonna judge who's been naught or nice(to the Illuminati)

Somethings coming to a town near you!