Medical and health symbol or something else? (What do you see?)

I'm sure many of you have seen this symbol. You can find this in every medical institution.

It's such a loud symbol waiting to be decipher so I figure that many of you that are looking to get in the know might enjoy this project. I see kundalini, serpent, bird, spine, and many other things if you know what I mean. I'm interested to see what your thoughts are on the subject.

Permalink Reply by eight on June 22, 2011 at 7:12pm
Fascinating Kaiak! Thank you for the thought. I say where the snakes face one another other refers to the pineal gland and the top of the staff pertains to the crown chakra.  I agree with everything else Kaiak says though.  Quite an interesting symbol.

wow i didnt even see that! Check you out! Good catch.

Permalink Reply by eight on June 24, 2011 at 11:22am
After meditating on the topic two nights ago, I have come to the conclusion that the bottom line is the relationship the symbol has with the Anunaki. Conclusion: The  Anunnaki
came to Earth some 450,000 years ago from the planet Nibiru a
member of our own solar system whose great orbit brings it to our part of the
heavens once every 3,600 years. They came here in need of gold, with
which to protect their dwindling atmosphere. Exhausted and in need of help
in mining the gold, their chief scientist Enki suggested that they use
their genetic knowledge to create the needed Primitive Workers. When
the other leaders of the Anunnaki asked: How can you create a new
being?
He answered:
"The being that we need already exists;
all that we have to do is put our mark on it."
The time was some 300,000 years ago.
What he had in mind was to upgrade genetically the existing hominids,
who were already on Earth through Evolution, by adding some of the
genes of the more advanced Anunnaki. That the Anunnaki, who could
already travel in space 450,000 years ago, possessed the genomic science
(whose threshold we have now reached) is clear not only from actual
texts but also from numerous depictions in which the double-helix of the DNA
is rendered as Entwined Serpents (a symbol still used for medicine and
healing)

Hey, did you make that image? It's amazing. Can I use it?

Well, I would say that the twisting snakes represent the double helix in our dna. The rod I'm not so sure about, but a winged disk is implied within this shape and also found in ancient Sumerian tombs and on monuments. Maybe it is implying our divine origins.

ida and pingala travelling up the shushumna, which is the central energy channel of the energetic body, on the physical, mirrored by the spine (although it is not the spine, the spine is just a physical manifestation of this which resides in a different, congruent dimension), the snakes and birds meeting are the alignment of the lower and higher self, as well as left and right, or hot and cold (conflicting) energies within, which have been mastered and are now in harmony.

you could develop your own symbolism for this if you wanted to, how would you picture it ? (:

the many feathers of the wings can be seen as the petals of the thousand fold lotus (sahasrara) which are each an eye or portal into another world, all simultaneously active; apparently, the crowning achievement of activation... mastery over the influence of the planets, whilst on earth.

saturn is the planet which corresponds to the crown... "heavy is the head that wears the crown" as the saying goes

.this is also a similar diagram. these snakes are known as, asclepius staff, the snake from the garden of eden, the orouboros, kundalini awakened by shakti, the brazen serpent, ida pingala and the 72,000 nadis (nerve channels/ ends),
and the world serpent,

also a curious question is what do these two images mean? 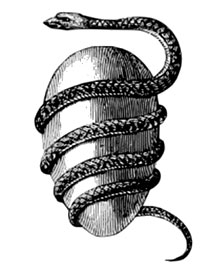 One of two things, probably both depending on where you are.

1, Energetic wings form when your energy body switches on. This is done from the serpent-like energy inside of you. Shown here in the progression and closing of dualities, though the rods duality is missing unless it is demonstrating ascent/descent.

2, Physical and Non Physical or the meeting of the two races avian/reptillian, there needs to be a better term than races (beings) but I lack it. If they exist I haven't met an avian since my last memory wipe but the reptillians I can vouch for in myself at least.

i met some reptilians in my dreams, wouldn't stand up as evidence in court, but it was a lucid dream...

this symbol could hold many meanings,  it is all how one perceives the symbol itself.  in my opinion it is a visual symbol of assention.

In many cultures, there is a belief of a world tree. and by traversing the world tree, one can travel not only on our plane of existence, but to the higher and lower plains.  Picture if you will, the tails and the center column  as the roots of the world tree.

The entwining snakes, as the "positive" and "negative" energies of the universe,  they form a spiral stair case both up and down the trunk of the tree, which could be taken to symbolize the world as we know it.  Where they intersect could be seen as both an entrance or exit from, our earthly existence, to the existence of "spirit".  This is how we as people can climb to higher knowledge or descend to knowledge.

where the heads of the snake meet and no longer progress, could be explained as a unification of energies within ourselves, they look at each other as if finally seeing for the first time.  notice what could be seen as a smile on each snake.  The orb on top of the entire symbol, is total enlightenment.  the union of all things.  the begining an end.  Totality.

but this is just my opinion.

Intersections of the nadis are chakras: When kundalini manifests outward, those thousands of nadis intersect here and there, forming the matrix of the subtle body. The major intersections are called chakras (section #5), and the five elements of earth, water, fire, air, and space manifest around these so as to form the gross body. Often, we speak of chakras as if they are in the body. Actually, this is somewhat backwards. It is more like the body has been suspended on the subtle chakras, with these chakras being formed or constructed by the major highway intersections of the nadis, which are none other than kundalini shakti.

From my what I've come to know, the Caduceus staff belongs to Hermes, and is the symbol of marketeers, liers, and thieves.

This is the true staff of medicine and health:

In the true spirit of esotericism I believe what Samuel posted up above is true.  Birds and snakes and chakras yo.  However, I really have much more admiration for health businesses (and they're typically private) that display the Staff of Asclepius on their front door.