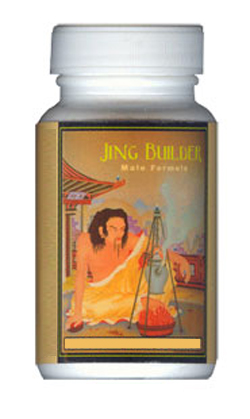 Persian, Ayurvedic and Tibetan medicines and meditation schools have long recognized the deep link between sexual well being and general health. Trogawa Rinpoche, a famous Tibetan doctor only recently passed away, often recommended a brief period of sexual abstinence in order to restore mental calm. If you don't want to abstain, but still want the benefits of increased sexual energy, Jing Builder can help.

The word jing in Chinese medicine refers to “essence”. Jing is stored in the kidneys and is yin in nature, which means it nourishes, fuels, and cools the body. Production of semen, in the man, is believed to place a great strain on jing energy. Therefore, keeping semen healthy and full can help keep jing strong. This leads to greater vitality, more drive, a powerful sense of health and strength, and greater potency in and out of the bedroom.

Taking Jing Builder regularly can help keep the body feeling youthful, increase fertility, improve sexual health, and can dramatically increase both the volume and potency of semen, allowing for more intense climaxes and quicker “bounce back” after orgasm. Taking Jing Builder soon after losing semen can increase the speed with which the body replenishes its supply and decrease post-coital depression and fatigue.

Used correctly, this product can improve both male and female sexual performance, increase semen volume and fertility power, and enhance sexual energy and enjoyment. Jing Builder is a safe and effective 100% natural supplement that really works!

Jing in Chinese medicine is the Chinese word for "essence", specifically kidney essence. Jing is stored in the kidneys and is yin in nature, which means it nourishes, fuels, and cools the body. Production of semen, in the man, and menstrual blood in the woman, are believed to place the biggest strains on jing. Although semen is sometimes equated with jing, this is not accurate. Semen is not jing, although semen is one of the primary expressions of jing in the male body. Because production of semen in men places the greatest strain on jing, a full and healthy supply of semen serves to nourish jing and allow it to transform more easily into chi and thus into shen, fueling the spiritual and creative aspects of human expression. When semen is lost, jing is immediately depleted in the the body’s efforts to replace it.

Our formula serves several purposes. First is to keep semen and seminal energy high and full. This provides the body with energy, allows the jing to more quickly transform into chi and thus shen, and can increase potency and fertility in men. Secondly, taking Jing Builder regularly can significantly increase the volume of semen present, thereby increasing intensity and length of climax and allowing for quicker “bounce back” after ejaculation. Thirdly, taking Jing Builder after losing semen can increase the speed at which the body replenishes its supply, and decreasing depression related symptoms that sometimes manifest after seminal loss, and decreasing demand on the body’s jing.

Taoist, Buddhist, and Tantric Hindu teachings all stress the importance of keeping one’s seminal essence intact, and replenishing it when lost. Jing Builder can help to keep semen full and seminal energy high, allowing the body’s energy to collect and build.

The theory behind Jing Builder is as follows: The natural conversion of jing into chi into shen can be enhanced, strengthened, and sped up. This is the process worked with in chi kung in general, and in practices such as Xi Sui Jing in specific. In order for the conversion to take place at all, jing must be, to some degree, full. When semen is lost, conversion of jing into chi is slowed, sometimes drastically, as the body fights to replenish the physical essence. If semen is kept full and replenished quickly when lost, the jing-chi-shen transformation is strengthened. Because semen and sperm are deeply connected with and related to jing, all but ceasing the jing-chi transformation when lost, keeping semen full allows the jing to pool and build. Jing Builder replenishes semen and keeps it full, thereby benefiting jing.

Zinc Aspartate
Zinc is essential for the proper functioning of the reproductive organs and normal functioning of the prostate gland. In addition, when combined with L-Lysine, there are additional benefits to sperm and semen quality. This mineral is found in high concentrations in male ejaculate and plays an important role in prostate health. Frequent ejaculations have been recorded to lower zinc presence in male's bodies. Low zinc is associated with poor sperm count and motility, especially when testosterone levels are low.

L-Carnitine
Clinically proven to significantly increase the percentage of highly motile sperm. Sperm production is the greatest drain on jing in the male body.

L-Arginine HCL
Positively impacts sperm and can as much as double semen volume. Improves fertility due to increasing sperm health and activity.

L-Lysine
When this amino acid is supplemented along with zinc, there is an increase in sperm production, testosterone production is increased, and semen quality improves.

See the discussion below for Jing Builder from practitioners.

Meditation, traditional Yoga and esoteric martial arts all emphasize the importance of keeping the body’s supply of sexual energy full. For men, this specifically means not losing semen and quickly replenishing it when it is lost. One reason for this is that the sexual energy is especially concentrated in the seminal fluid of the male. Jing Builder can be used to increase the volume and potency of seminal fluid and thereby to increase the energy associated with this powerful source of power and vitality, often in a dramatic way. Here we will discuss the use of Jing Builder in these traditions.

Yoga’s traditional source texts go into great detail about the importance of keeping the male sexual fluids in the body, and teach techniques for extracting the essence of these fluids for higher spiritual practices. In yoga, the loss of semen is the loss of power, and when this power is lost through ejaculation or sickness, the fundamental fuel for spiritual development is temporarily lost as well. This means a loss of the drive, focus, and physical and mental power necessary to complete the spiritual journey as well. Usually such a loss means a long waiting period is necessary, sometimes as much as 100 days, before spiritual practice can be returned to in earnest. Jing Builder can help to keep seminal energy high and to quickly replenish it when lost.

In most Asian forms of yoga and meditation, a similar prohibition on semen loss is enforced. Taoist manuals such as the Marrow/Brain Washing Classic, attributed to Bodhidharma, teach special methods for increasing the volume and potency of seminal energy, with the focus being on refining and extracting the essence of this fluid to vitalize, cleanse and empower the body and mind.

The martial arts, with their emphasis on building chi energy to vitalize and strengthen the body with it, also looks to seminal fluid as the grossest source of this energy available for transformation. Thus these traditions all stress the importance of keeping the man’s seminal essence intact, and quickly replenishing it when lost. Jing Builder can help to keep semen full and seminal energy high, allowing the body’s energy to collect and build, and giving one access to more profound and deep states of physical and mental coordination and development.

See Book Below for more details on Male Anatomy.

I would suggest anyone wanting to take this supplement to order two as you will need 120 capsules for a 30 day odd month supply. It is worth it as before I was taking a test booster containing Tribulus, Avena Sativa, Fenugreek Extract's. As well as a ZMA supplement to get similar affects as Jing builder before I discovered. This Jing builder  by siddhienergetics is 4 capsules a day instead of the 5 I was taking before hand :)

Lately I have been experiencing mental and physical fatigue and was wondering if i should pick up this or Chulen, anybody have any experiance with both?

Pumpkin  seeds pack quite a bit of the zinc (also the aminos (lysine, arginine, and some copper). Sesame seeds as well.  Stay as natural as possible (sometimes difficult due to contamination ie turkish apricots (nuclear) which are high in potassium and copper)

..I don't know about the: Marrow/Brain Washing Classic,but the Yi Jin Jing Muscle/Tendon Changing is attributed to Bodhidharma.