THE RESISTANCE - A LONG HISTORY OF REMOVING OPPRESSORS

Here you will find a very cohesive script that was a joy to read as many questions have been confirmed and answered. I get a very clear feeling that We have other versions of us on this dimension and they are all working on their particular part of this grand awakening.

It has also become clear to me why people are so attached to certain symbolism and will defend it with their life although they are quite unclear on what it truly means. Now you get the true meaning behind symbols and why they resonate with use so deeply.

It is my pleasure to introduce the work of Seven Star Hand's to you as he is a most enlightened individual with true integrity. This document, Finishing the Mysteries - Revision 3, will give exactly what you need right now in light of the current situations to gain yet a even firmer foundation. I feel so fortunate that this is the role I can be in for you, providing chunks of Totality.

I have also included a side study "Vaticanus" here, a declassified Vatican document related to the known prophecy of the Saturnalian Deception carried out by the Papacy. It is clear to me now the direction of the disturbed flux, and as their days are numbered and are expiring as of now, the beast must be laid bare and dragged about the streets. Reapers will no longer Sow.

Vaticanus Note: A very peculiar thing has happened with this particular text. Each Scribe that has copied the text, and there has been at least 10 including Nostradamus, has been responsible for depicting the creatures and the scenes exactly as they have been shown in the original. 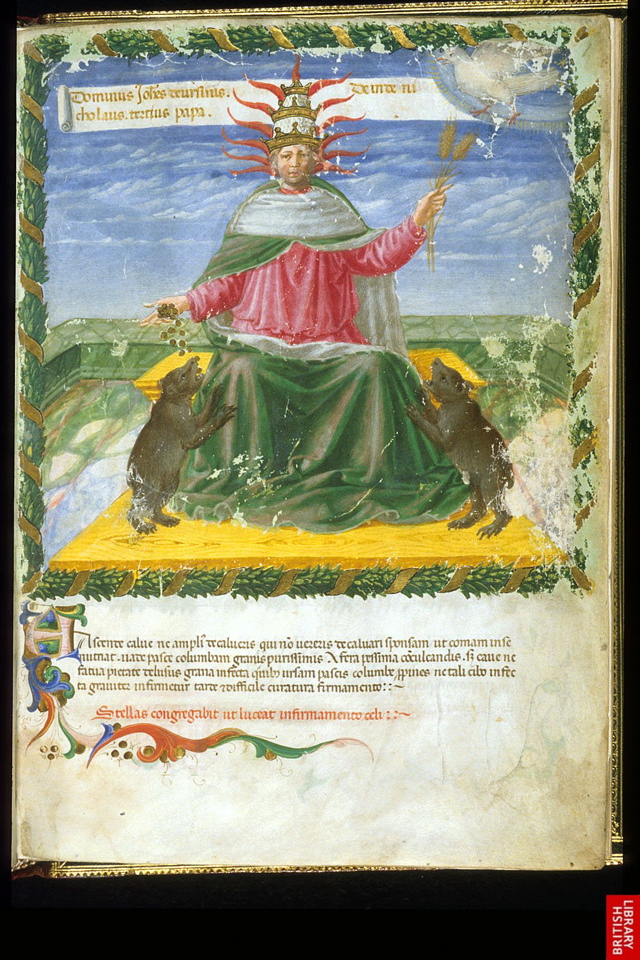 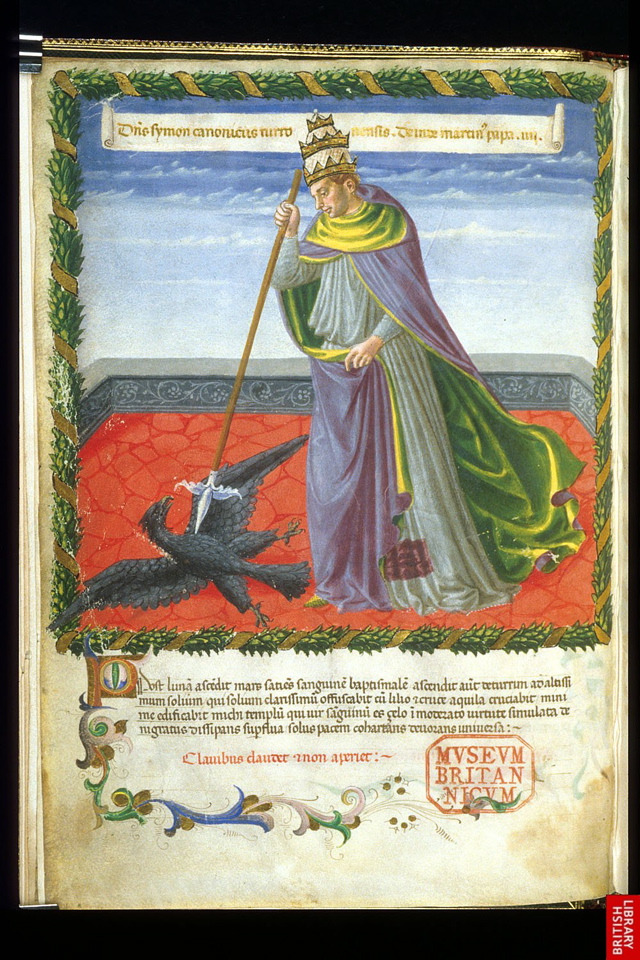 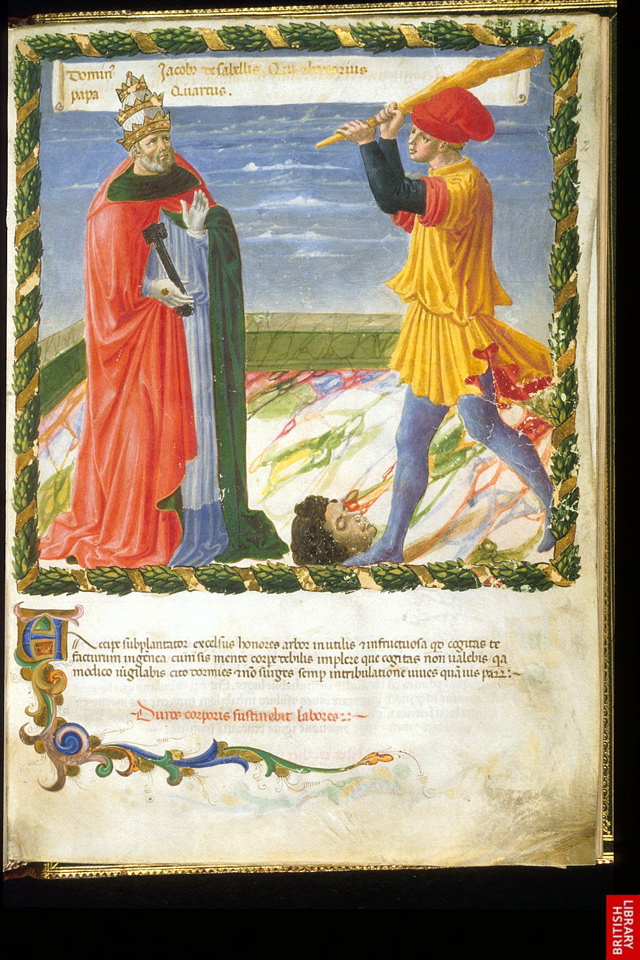 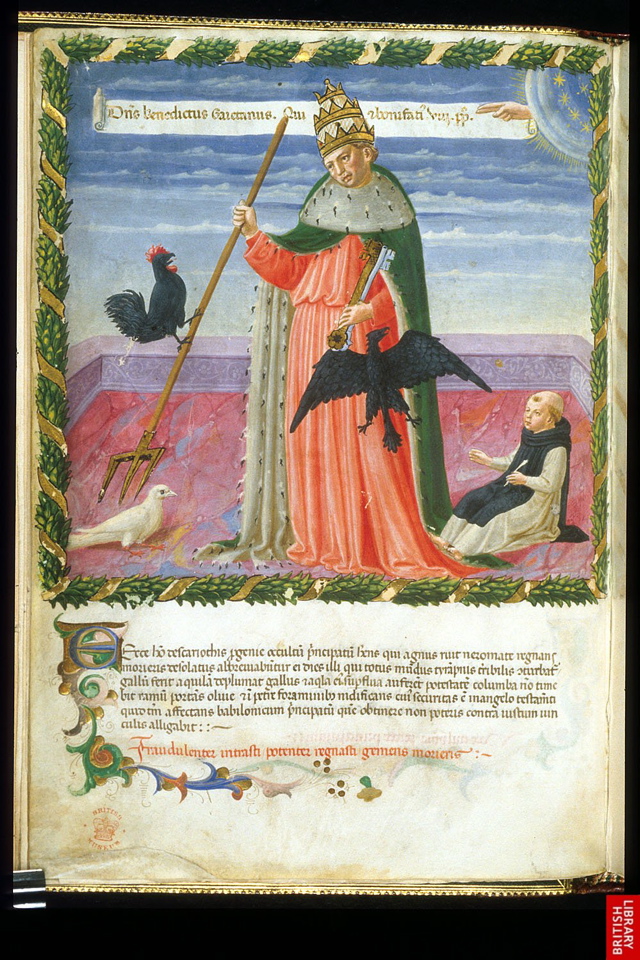 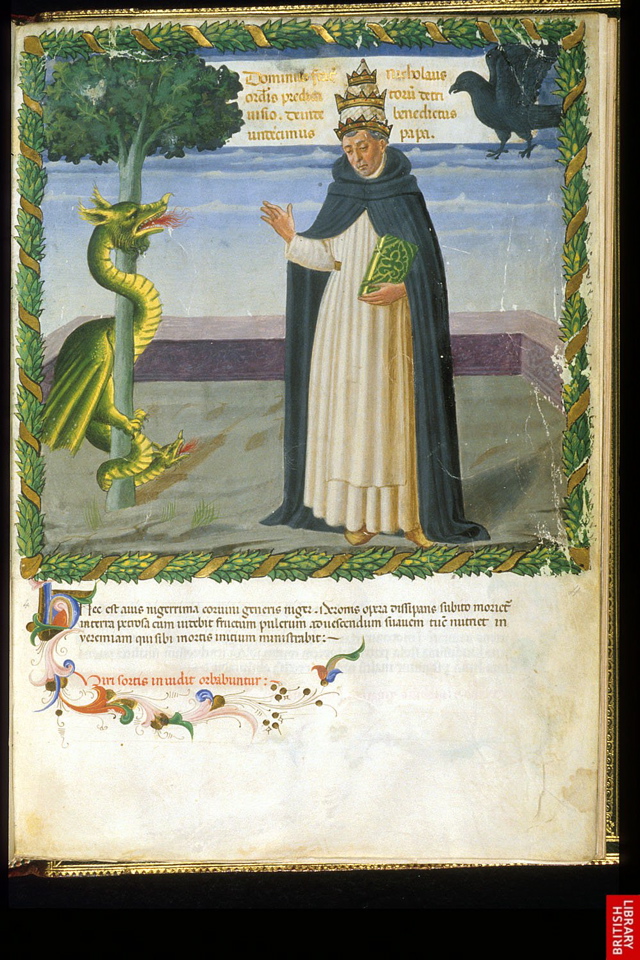 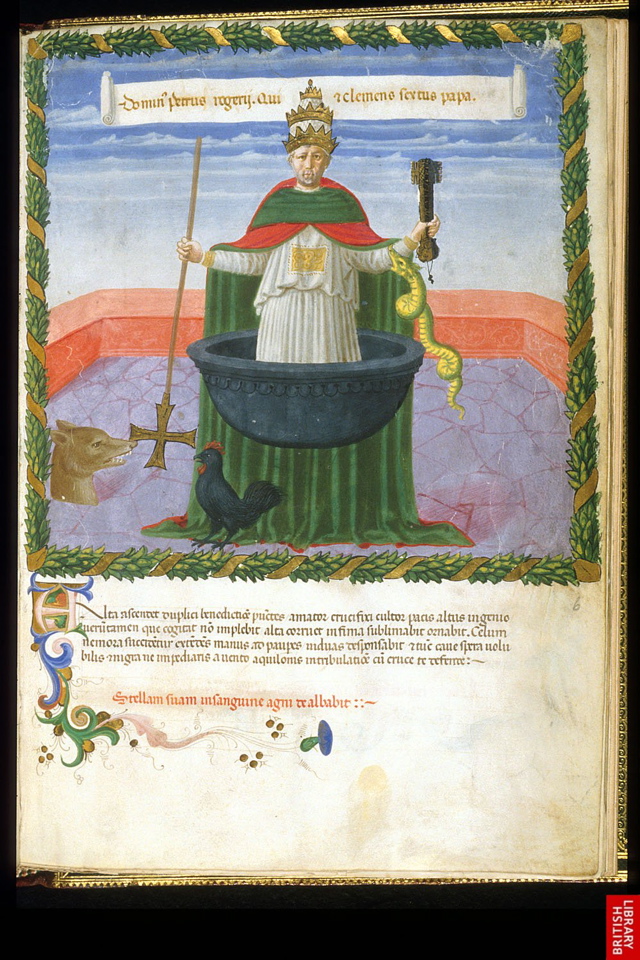 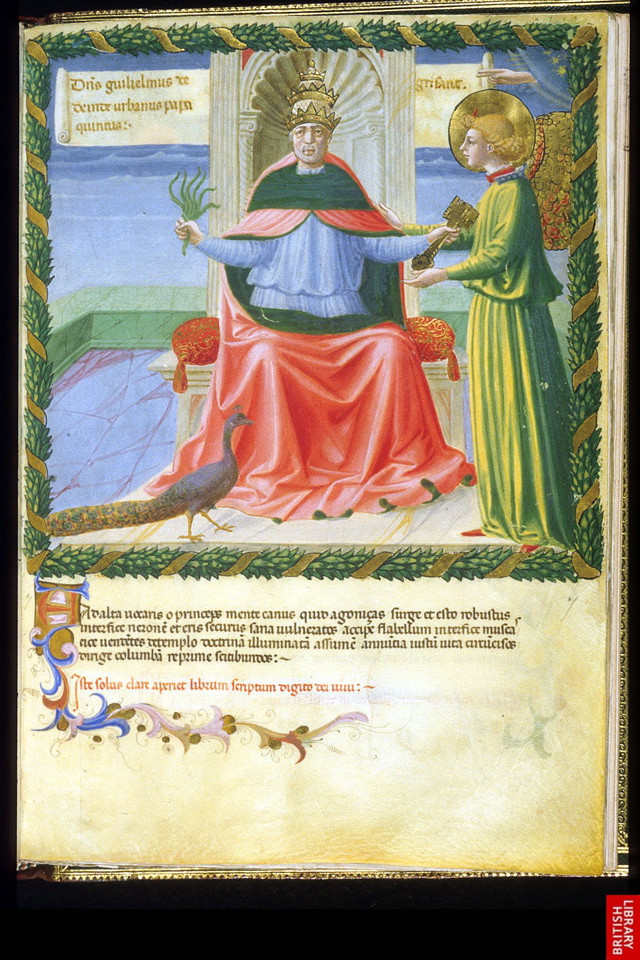 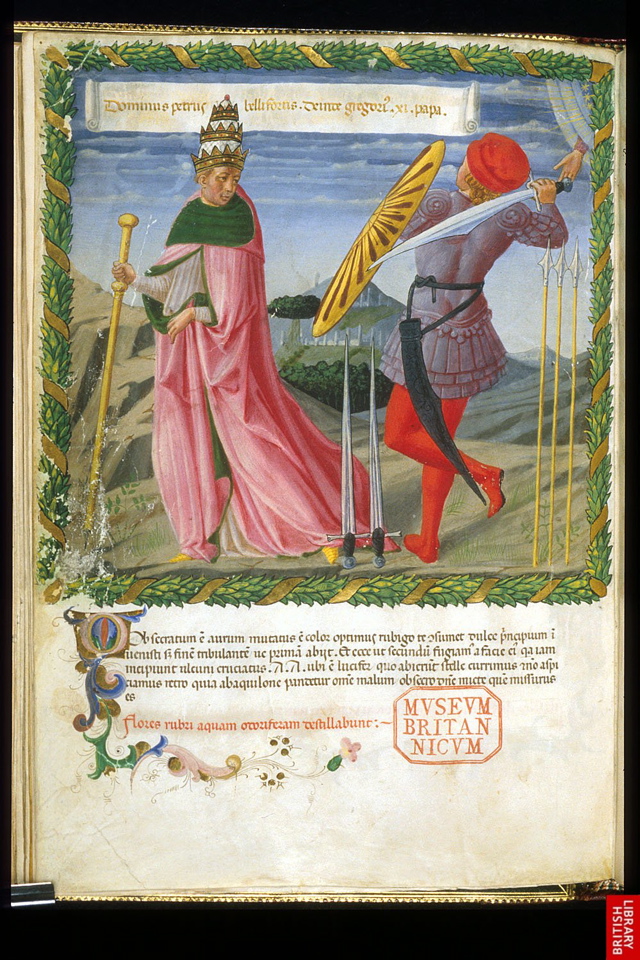 FACES A NEW MUCH MORE INTREPID AND EQUIPPED FOE BECOMES THE LOWLY BEAST ON THE WANE 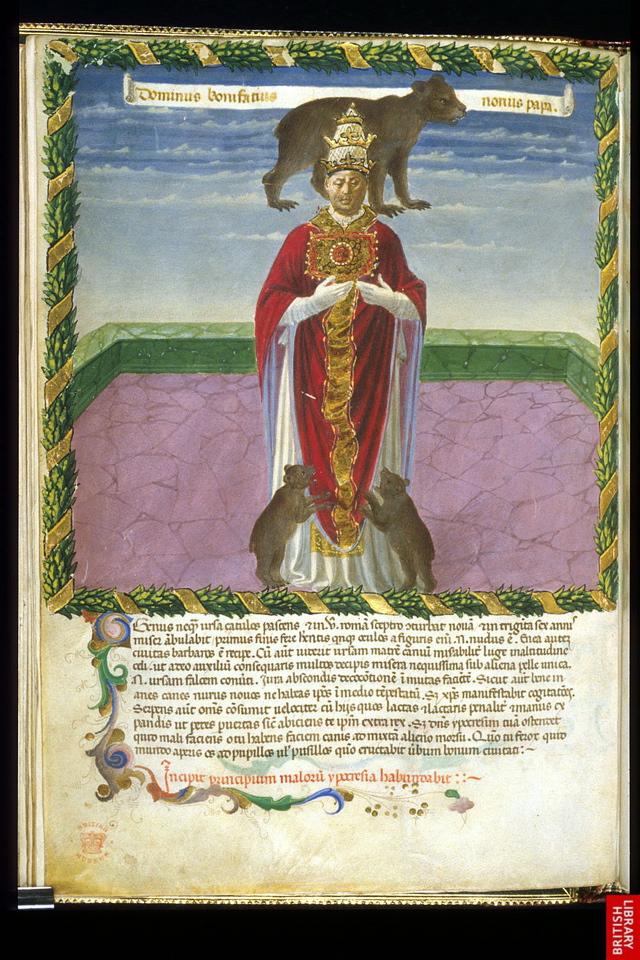 REMAINS KING OVER HIS ORIGINAL GENERATION 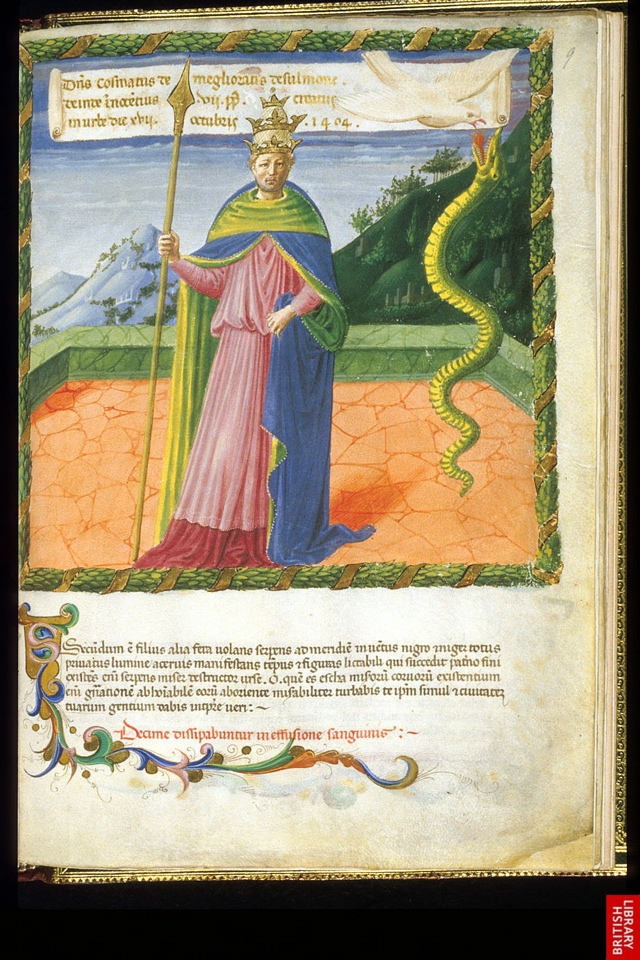 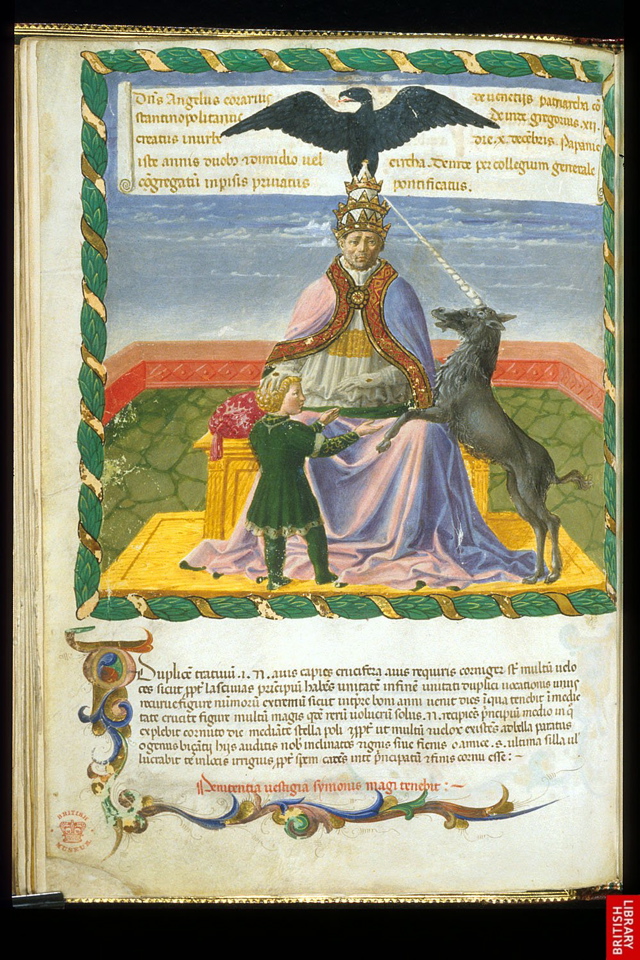 THE DECEPTION CONTINUES SPEWING UPON THE YOUTH AND THE MAGICAL 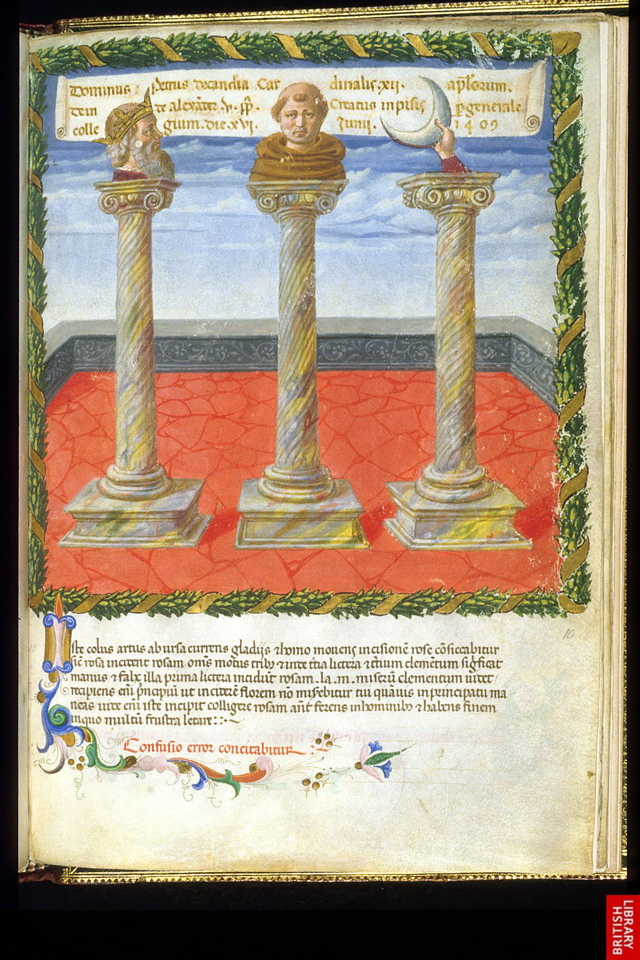 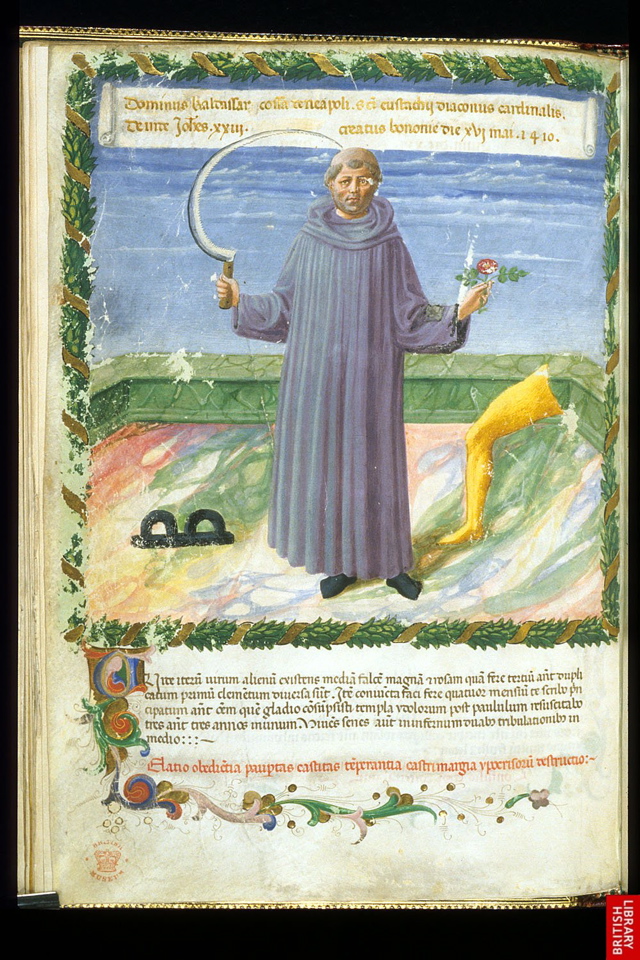 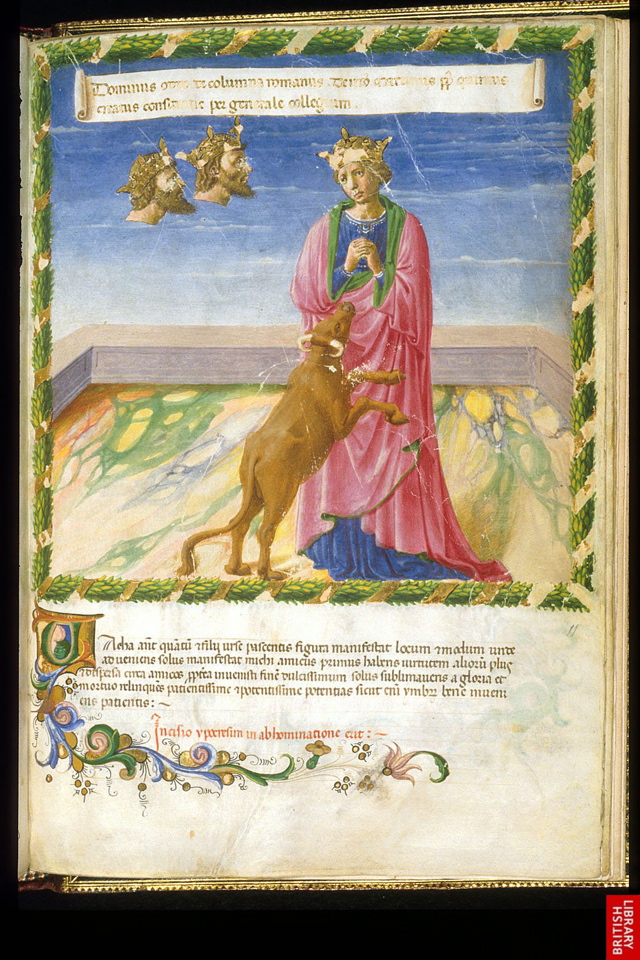 A CONSULTATION TAKES PLACE IN THE HIERARCHY 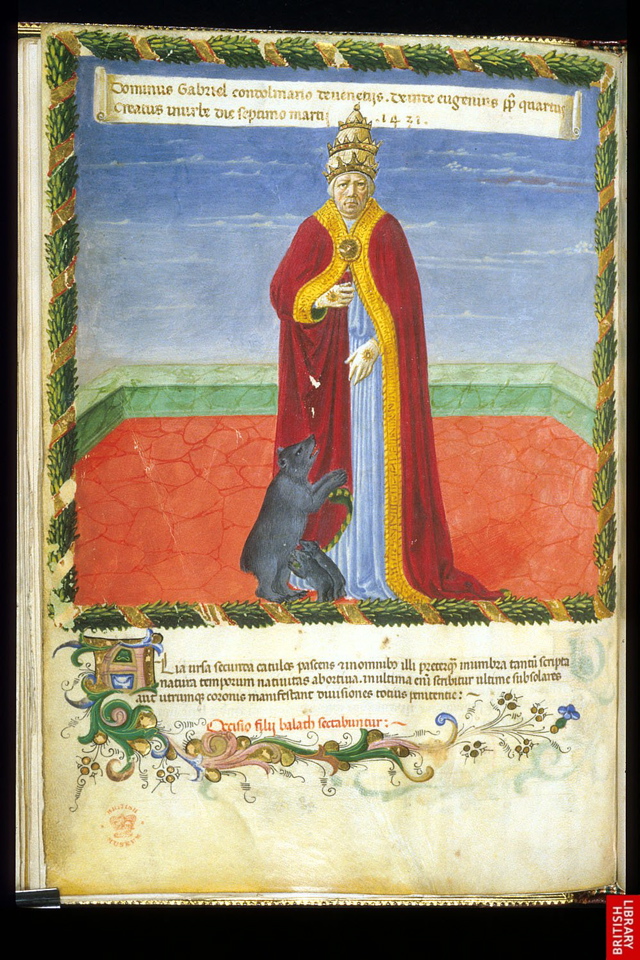 MARKS/COVENANTS ON THE HAND ARE RECEIVED 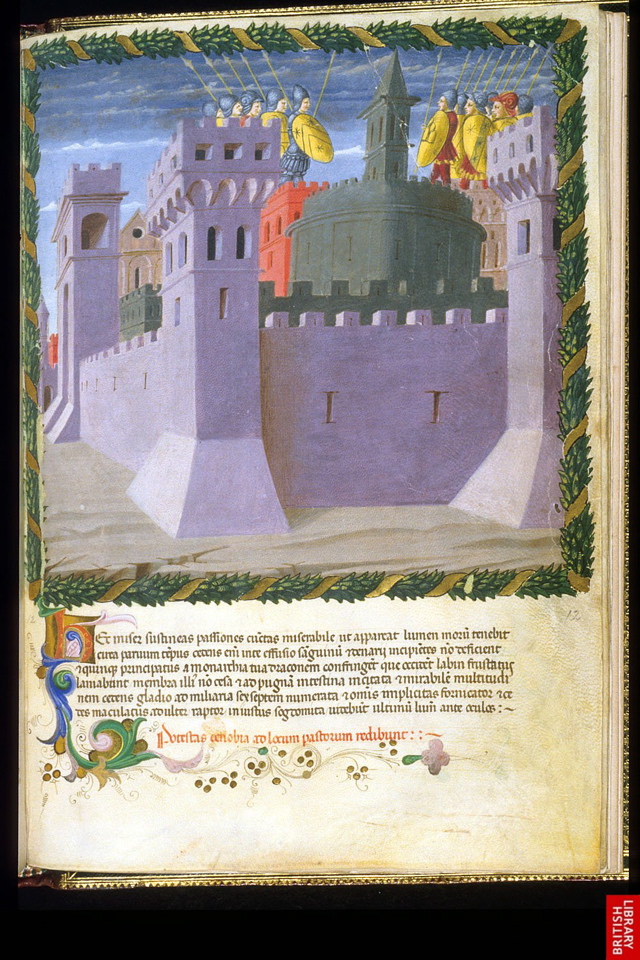 AGREEMENTS ARE MADE - HIDDEN HANDS CANAAN IS GRANTED RULERSHIP OVER THE 3 KINGDOMS BUT SERVES 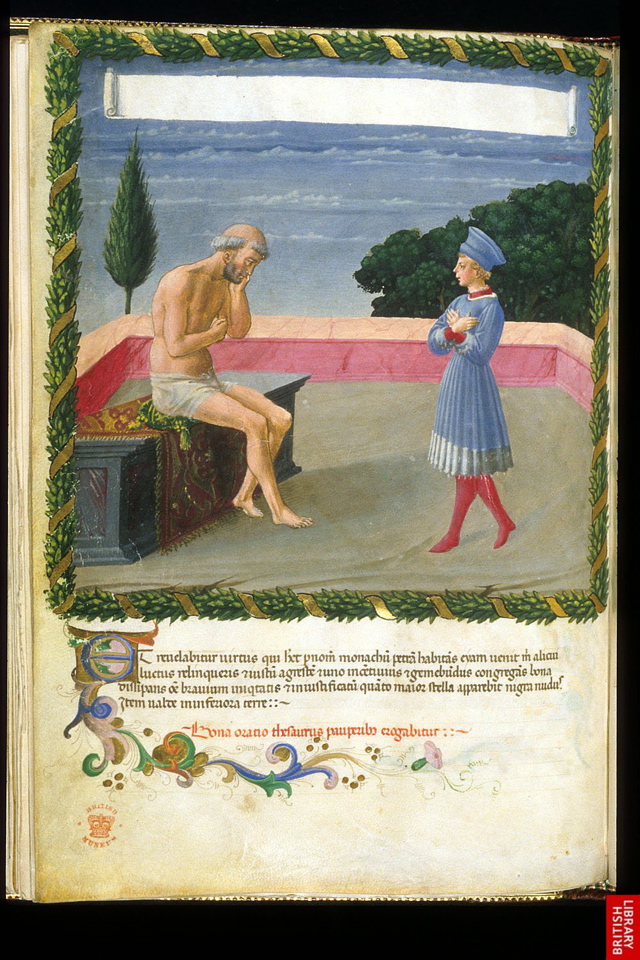 A YOUTH ENTERS INTO THE COUNCIL POSSIBLY LUCIFER 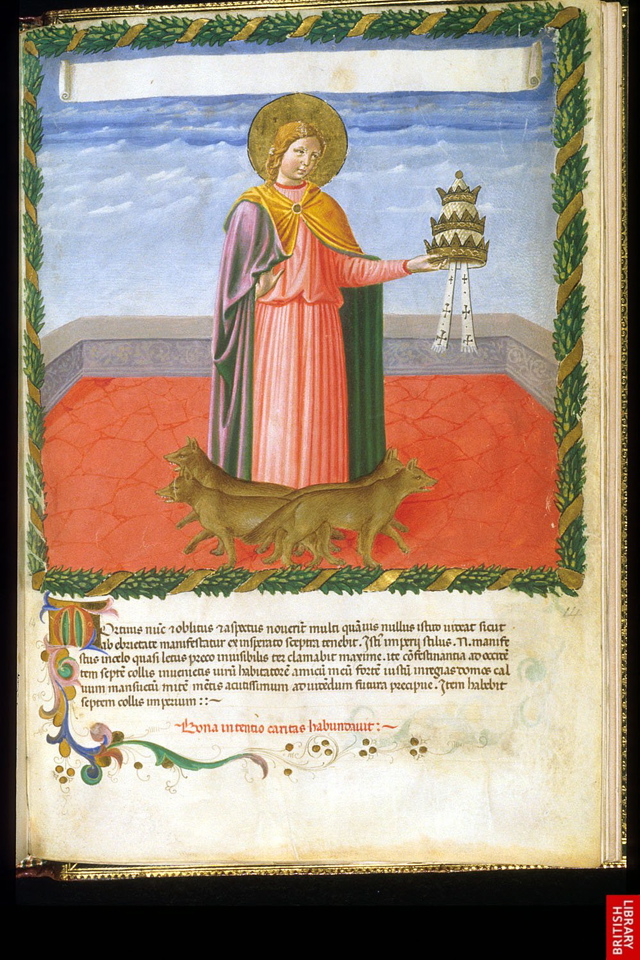 A MAIDEN SHARES THE KINGSHIP 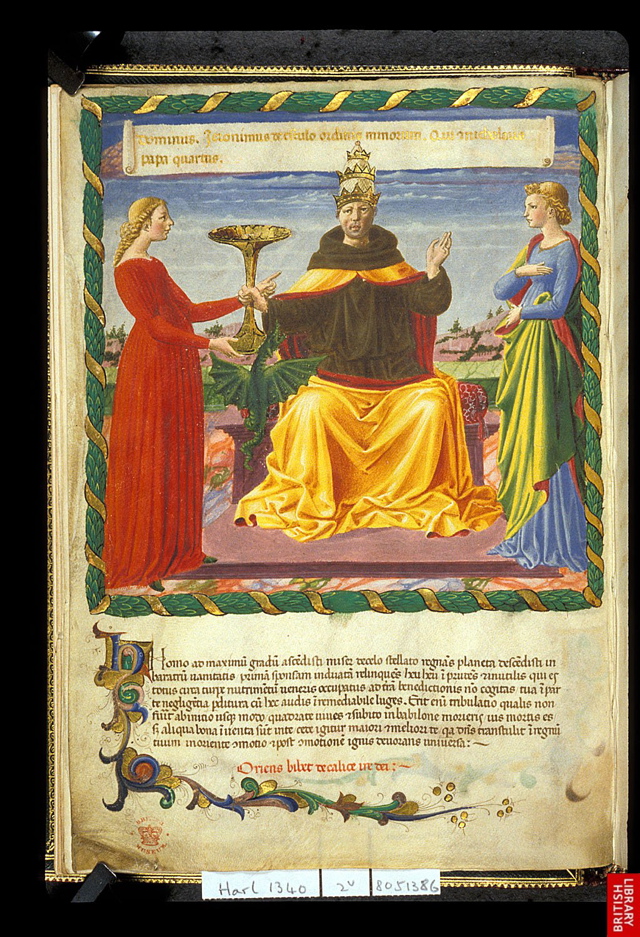 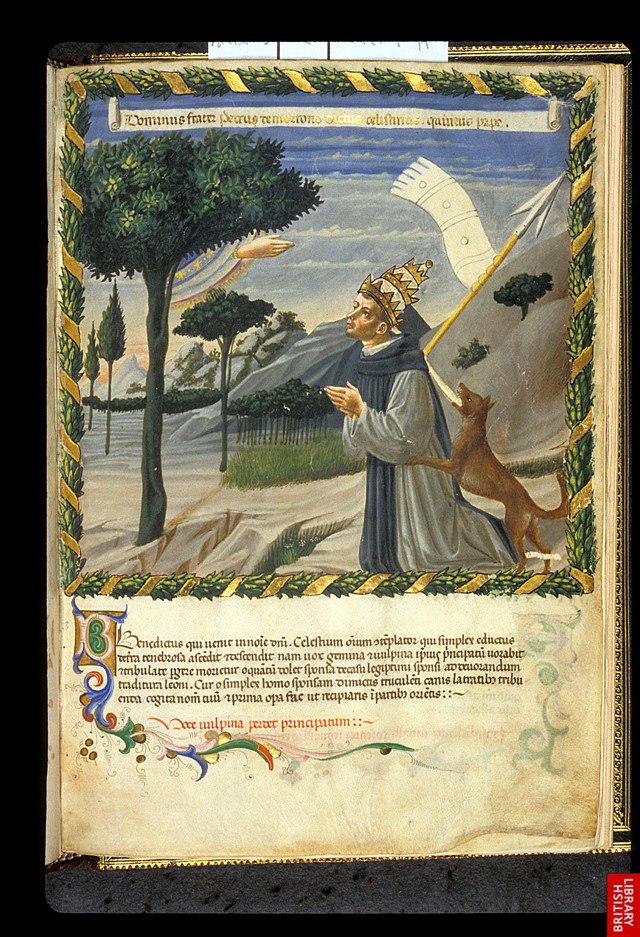 REMAINS IN SERVICE TO THE HIDDEN HAND

In many cases certain Scribe's chose to use a different animal such as Nostadamus's substitution of the Peacock for the Phoenix. However in many cases with occult lure these birds play the exact same role and are close enough in relation when stripping the titles apart through etymology. However I have noticed the variations from land to land. I have included links to other scripts as I have posted the 2 best references.

Lastly there appears to be a dispute over the final order. I posted the most cohesive order but it shows that one not only had the duty to transcribe properly but in any event something was moved out of correct order the exact time of a prophecy being fulfilled could be mistaken.

Access Direct link to the Vaticanus Collection by clicking HERE

If you mention astrotheology to a modern day christian, muslim or jew who has personified their god they flip out with indignation. I wish this author would use 3D geometry rather than the flat square, circle, cross symbolism that he favors. Magnetism the Serpent to me is still the key to the earthgrid and the specific placement of stone circles, churches and other places of power. The Viking Serpent book and videos reveal a large pentagram based on the golden mean laid out across Norway:

There are many metaphors hiding within every symbol. Carl Munck revealed a lot about other dimensions hiding in the tangent to the speed of light. Light is not a fixed limit to the resolution speed of our holographic reality.

The celestial connections to our Earth's grid need to be fleshed out.

Waves are 3D spirals, not the flat sinusoidal curves we draw in high school math:

The Papal Tiara ( a pine cone ) and the Vatican control of the collective 3rd eye:

While I try not to dwell on this too much, because my focus is on positive things including ways to refuse to participate in their satanic  ( Saturnian linear time ) system, as well as ways to bring back God's ( ie, good/sharing ) system.

The Papal Tiara or triple crown is a veiled way of saying "3rd eye", ie. a functioning pineal ( pine cone , pine apple ) gland. Mercury in dental fillings and vaccines, aluminum and benzene in processed food, industrial pollution all contribute to limiting the function of our limbic brain's pineal gland. It controls our aging, ie. time. Night and Day, ie black and white control its function.

The Earth as a living being also has a 3rd eye and a chakra system in the Earth Grid. That's why the Vatican an 11 acre nation state sits atop 7 hills ( a microcosmic fractal of the inner chakra system ) and controls the global religious systems. The mideast crisis is controlled. A Catholic cardinal started the Islamic faith in the 5th century. All three Abrahamic "faiths" are centered in cubism, the worship of Saturn ( A cube has 6 faces ).

The 6th chakra of the human energy system is the 3rd eye/pineal gland (6, 3 times = 666). When your 3rd eye chakra opens you develop your 6th sense of intuition and spirituality. From a consciousness perspective, the 6th sense, your intuitions/hunches, are messengers of god, your guardian angels.
http://www.disclose.tv/forum/saturn-worship-black-cube-t32401-90.html
The isoceles triangle on the back of the US currency: 60:60:60 degree angles.

Why we wear a square on our head when we graduate from universe-city.

Permalink Reply by Agito on March 18, 2011 at 2:07am
i remember seeing pictures like these when i was a child. i forgot where i saw them, it couldve even been in my dreams. all i remember about them is that i used to be scared of them, i didnt know why i was afraid but i knew they were no good

Permalink Reply by ZERO on March 18, 2011 at 7:17pm
i have been reading this book now for a few days. its crazy good. thanks sevan

Great link to Mathew Delooze and his book. Break the spell by thinking for yourself. Wise words for sure!

There were a couple videos of him getting interviewed, one on EdgeMediaTV 50 minutes long. I found this shorter youtube clip contained all the pertinent info: http://www.youtube.com/watch?v=yRO7VQpC8vU

Regarding that Norwegian Pentagram, I feel it wasn't built for constructive purposes. David Icke spoke at length about the missing capstone, like the Norwegian layout has and why it's missing. The Norwegian guy says its to let God in, to the pentagram. Somehow this doesn't ring true to me. The period of history in which the 5 churches were constructed were the dark ages for a reason. All those medievil cathedrals ( catheter - ie. a drain on energy ) being built during this explosion of effort, supposedly to take people out of the feudal system? Which to me is still in place today, just hidden like the pentagram.

or the order's homepage: http://www.trapezoid.org/

Here's a better trapezoid image with the missing capstone:

Reading the rules and goals for these people it is easy to see why the captone is missing!

Focus on the self is their goal.