A few nights ago I woke up as usual, the only difference being I saw red grid lines on my ceiling, I have never experienced this before or anything of a similar nature and after speaking with a few friends of mine, we have yet to come up with an explanation that I feel quite makes sense. If there is anyone that has experienced anything similar or could offer a few words to shed some light on this situation, it would be of great benefit to me.

Wow!  I was in a lucid dream a few days ago, and as I was on the borderline of coming out of it, I saw orange grid lines and then adjusted my eyes and seen red grid lines in the skies as well.

I sometimes see a black web when I wake up. It happened at least three times but it only lasts a second and then it goes away. I have no idea about the cause myself but it could be that there is a literal veil cast over this reality that we ignore in our day to day life but is vissible when we are somewhere between awake and asleep.

I hope this helped :D wholeness

Mine lasted about 15 seconds were Yours around the same length of time Zen, Zbojnick yes that has helped, Have You seen it recently ?

Actually yes, it was only a few days ago. As soon as I woke up I saw it and it lasted until I adjusted my eyes. It looked something like this: 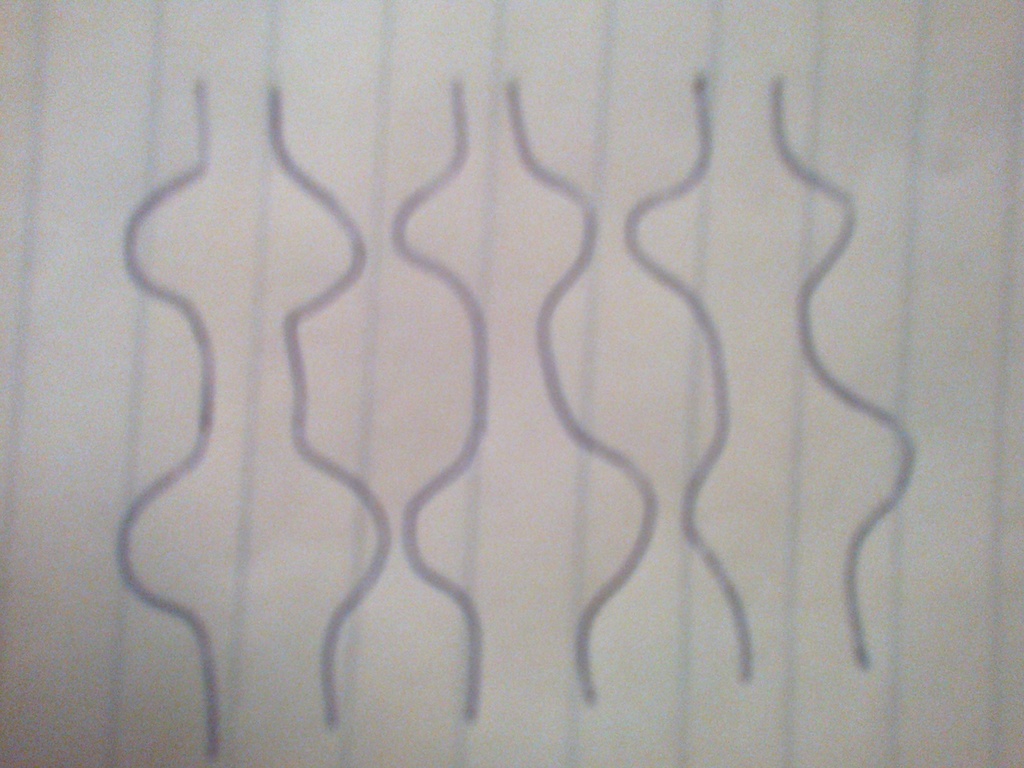 Yeah, I suppose it was about 10 seconds per... First the orange, which seemed to be a larger square grid pattern then, I adjusted my eyes, I believe upward - and then the red pattern which was the same standard square grid, but it was tighter mesh.  I don't know if I was astral traveling, obe, or just a lucid dream, but it felt a bit like an obe, as the lucidity and 'brightness' was intense - which woke me.

Quite interesting and awesome - I've had a few other times where I got a grid during sleep/wake but nothing as vivid as this.

As a note, I have been taking some etherium gold here and there and another gold Ormus product which I suppose could be assisting.

Any more info from anyone would be great, but surely the art of fish oil (artificial) grid resonates.  Maybe Sevan could chime in on this subject.

Thank You for the picture Zbojnick but mine were straight lines, not curved like in Your picture.
I agree Zen, I would appreciate anyone elses point of view on this matter.

I see these lines all the time and have been for the last 7 years at least after a "leveling up" I became aware of them. I have discovered that these lines are visible by anyone that either has a partially open third eye, especially when waking up around 3:00 A.M. or they have avoided light for a decent period of time, at least a week. These lines are the various grids and systems of communication and most of which are inorganic. This can be easily determined by the perfect straight line and intersecting line grid they generally are accompanied with. However I have also seen the patterns from the Chakras all over the wall, mainly mandala style patterns featuring no straight lines when suddenly awakening from a very vivid dream. Consider this when you consider the effects that light has on our optical system.

"Only in very recent times have medical scientists identified the hormonal secretion of the pineal gland, finally isolating it in 1968. The essence was called melatonin, which means 'night worker' (from the Greek, melos, meaning 'black', and tosos, meaning 'labour'). Those with a high melatonin output react strongly against sunlight because it affects their mental capability; they are essentially night operatives. Melatonin is called the 'hormone of darkness' as it is produced only at night or in the dark. Exposure to an excess of sunlight actually makes the pineal gland smaller and lessens spiritual awareness, whereas darkness and high pineal activity enhance the keen intuitive knowledge of the subtle mind while reducing the stress factor."

Thank You all for the information You have given me, it has really helped to answer my question and given me a few more things to think about as well.

These lines I would see upon waking and also my daughter ( ( she thought they were worms or at least that's what her young mind called them) , Like falling snow. so confusing, I would actually duck and so would she. My husband was wondering if we were going mad.. At the same time Lol! we were so advanced then, wish that I knew the value of then, now I am forever trying to get that ability back. she was so intuitive I would have to ask her to stay out of my dreams, (smile)  as was I. I also did not understand the Warm flood of bright that overwhelmed my brain. Or that would flash brightly like a pulse. If I only knew then what I know Now, I would have had no fear.. Peace and Love fellow travelers.

So, Sevan are you stating that darkness, being in darkness can assist in opening the pineal gland even further? I heard that sungazing is an effective method to doing so as well, which seems like the opposite from the quotation above.

Good question.  I was thinking same.  My eyes are burnt with lines of text just from reading this page. Im super sensitive to bright light...