ARE TWO SUNS VISIBLE IN OUR SKY RIGHT NOW?

A few days ago I was listening to Dr. Blair talk about the two suns. He said that anyone could take pictures of it a couple hours before sunset. So, thats what I did. I took these photos while at my daughters softball game. They're pretty cool. Also notice the Chem trails all across the sky in that area. It seems that every late afternoon and evening the planes can be seen spraying across the Western sky. Is someone trying to hide something?
The Third Picture was the one I took first, Dr. Blair also said Nibiru sometimes shows up. The lighter dot could be Nibiru. Hmm.

Permalink Reply by Ken Burrows on July 27, 2010 at 7:54pm
my personal email is kenburrows@mac.com , this is the only place I can talk about the things I know and think about without ridicule. wholeness my bro, Ken

Permalink Reply by aura on July 28, 2010 at 9:27am
wholeness ken
those are great pictures, right above the rays of the sun i see a faint red circle the size of the sun, and a red and white dot off to the left, in the third picture. about the chemtrails, those things have been lacing the sky, this morning i woke up to see not clouds but chemtrail residuals, they have been very busy here too. when i was traveling from arizona to california i've had an experience with chemtrail that i would not ever want to experience again. and if one will observe the reactions of chemtrails, it is not only weather affected but also emotional effects.. there is a lot to this chemtrails.... wholeness and balance vibrations 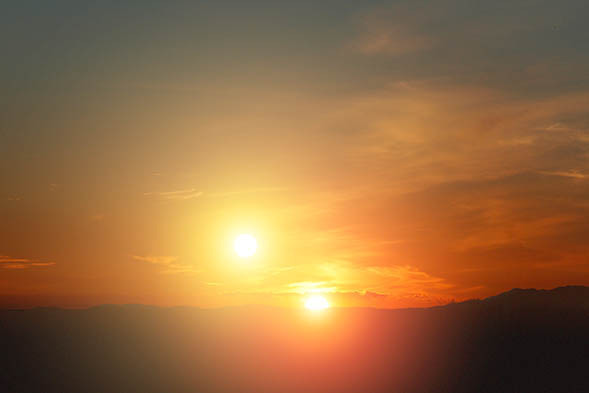 Our solitary sunsets here on Earth might not be all that common in the grand scheme of things. New observations from NASA's Spitzer Space Telescope have revealed that mature planetary systemsâdusty disks of asteroids, comets, and possibly planetsâare more frequent around close-knit twin, or binary, stars than single stars like our Sun. That means sunsets like the one portrayed in this artist's photo concept, and more famously in the movie Star Wars, might be quite commonplace in the universe.

Binary and multiple-star systems are about twice as abundant as single-star systems in our galaxy, and, in theory, other galaxies. In a typical binary system, two stars of roughly similar masses twirl around each other like pair-figure skaters. In some systems, the two stars are very far apart and barely interact with each other. In other cases, the stellar twins are intricately linked, whipping around each other quickly due to the force of gravity, and even transferring the outer layers of their atmospheres from one star to the other.

Astronomers have discovered dozens of planets that orbit around a single member of a very wide stellar duo. Sunsets from these worlds would look like our own, and the second sun would just look like a bright star in the night sky.

But do planets exist in the tighter systems, where two suns would dip below a planet's horizon one by one? Unveiling planets in these systems is tricky, so astronomers used Spitzer to look for disks of swirling planetary debris instead. These disks are made of asteroids, comets and possibly planets. The rocky material in them bangs together and kicks up dust that Spitzer's infrared eyes can see. Our own Solar System is swaddled in a similar type of disk.

Surprisingly, Spitzer found more debris disks around the tightest binaries it studied (about 20 stars) than in a comparable sample of single stars. About 60 percent of the tight binaries had disks, while only about 20% of the single stars had them. These snug binary systems are as close or closer than just three times the distance between Earth and the sun. And the disks in these systems were found to circumnavigate both members of the star pair, rather than just one.

Though follow-up studies are needed, the results could mean that planet formation is more common around extra-tight binary stars than single stars. Since these types of systems would experience double sunsets, the artistic view portrayed here might not be fiction.

Permalink Reply by esdsix on August 14, 2010 at 7:26pm
Ken thats very interesting. Brings me back to the Nibiru discussions I've had. I wonder. Hmm.

Permalink Reply by GalacticWacko on August 14, 2010 at 11:26pm
that looks like a lense flare to me... They can be quite convincing at times... One time I posted a video and got all excited about it... Only having to take it down once I realized it was just a lense flare. Not sayin Planet X aint around... I dunno where that thing is...

Permalink Reply by esdsix on September 22, 2010 at 11:36pm
Nibiru...I feel like if things poppin up in the sky, obviously somethings out there, period. Nibiru (Planet X) who knonws. Whatever it is, its huge! I read something once that said, our sun, can fit a million earths! That BIG!
So, when u look at that...Then u see this smaller object near it, imagine...Hmmm, if its really something and not a lens flare...Whoa..Then what is it...Seems that "they" would prefer to keep everyone in the dark, considering "they" know exactly what it is...If its imperative to humanity, will "they" mention it? NO! Will they even tell the truth? NO! And if "they" did, it would be too late...

I feel in these times, PEOPLE of the masses should be consciously perceptive with awareness to all things around.. Seen, heard, photographed, disclosed, or whatever...However, not all things will be truth...Which is what I personally seek,,TRUTH & LIGHT! This density offers so much for us to see, all we need to do is open our 3rd eye, and escape the deep sleep..Cause the deep sleep is nothing more than THE AMERICAN DREAM...You have to be "asleep" to believe it!

I look forward to a mass awakening. This will be a beautiful thing! Well needed in our aspect of reality.."They" say think outside the box. I say pop the bubble completely, once and for all!

So, IF the pics are Nibiru...So be it..We need the next step. If a UFO flies by...Very cool.. However, "Who's" flying it and why, is of higher importance! I dunno, I notice these things all the time...But no one comes with real answers. That's what we need, FACTS! Not that IF things exist, but who what when where how and why? Ya feel?

Wholeness to all of you! May the light lead the way..TRUTH AND LIGHT!

Permalink Reply by Kemetic Thoughts on September 22, 2010 at 9:25pm
Pics i took of the sun a few months ago...
Attachments:

Permalink Reply by esdsix on September 22, 2010 at 11:23pm
Ive definitely heard of this...I guess the real test would be to tack some of my own pics. I wonder what lens would expose more, anyone know? Ive noticed within the last year, that at nite theres a bright object right next to the moon..I dunno if its a planet or what? I wonder if its the same thing youve taken a picture of, I dunno. Keep investigating...Anything new pops up, let us know..Its good that you're aware of things like that tho. The average mind is on, what can I buy, what can I wear, wheres the nearest bar, Is the game on tonite? Yada yada.. Ya know.. They ain ready (the many).